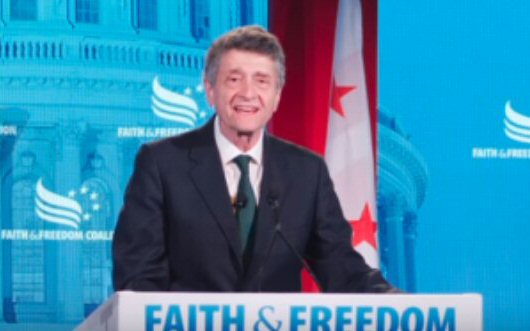 Born in Philadelphia, Michael attended public schools in San Diego and Los Angeles before starting Yale at age 16 as a National Merit Scholar. He majored in American History and graduated with honors, before attending Yale Law School, where his classmates included Bill and Hillary Clinton.

After several years as a campaign speechwriter and political consultant, Michael wrote his first bestseller at age 26—WHAT REALLY HAPPENED TO THE CLASS OF ’65?, a skeptical reconsideration of the “counterculture” of the 1960s that became a weekly TV series on NBC. Michael’s subsequent 12 books include THE SHADOW PRESIDENTS, hailed as the definitive history of White House chiefs of staff; HOLLYWOOD VS. AMERICA,a stinging indictment of the entertainment industry; and RIGHT TURNS, which tells the story of Michael’s transformation from “punk liberal activist to lovable conservative curmudgeon.”  THE 10 BIG LIES ABOUT AMERICA (2008) and THE 5 BIG LIES ABOUT AMERICAN BUSINESS (2010), confront the most common smears against the United States and its free market system.

Medved’s most recent books, THE AMERICAN MIRACLE: DIVINE PROVIDENCE IN THE RISE OF THE REPUBLIC and GOD’S HAND ON AMERICA: DIVINE PROVIDENCE IN THE MODERN ERA, describe astonishing incidents in which luck,nature or some higher power seemed to intervene on behalf the United States. In the books, Michael argues that a “pattern of happy accidents” is still a pattern, and sides with the Founders in seeing America as “fortune’s favorite”and “destiny’s darling.”

Michael’s columns on politics and media appear frequently in USA Today, where he is a member of the Board of Contributors. His work as a film critic, based on short-lived experience as a Hollywood screen writer, featured positions at CNN(1980-84), Great Britain’s Channel 4 Network (1984), and PBS (1985-96) where he served as co-host of the popular weekly show Sneak Previews. He was also Chief Film Critic of the New York Post for five years before launching his daily radio show in 1996.

Michael has been married for 33 years to clinical psychologist Dr. Diane Medved, a bestselling author in her own right (THE CASE AGAINST DIVORCE). Diane’s latest book, DON’T DIVORCE: POWERFUL ARGUMENT FOR SAVING AND REVITALIZING YOUR MARRIAGE, was released in March, 2017.  They live in the Seattle area where they raised their three children.

Some Embarrassing Secrets About Michael

He failed his driver’s license driving test three times before he finally passed it as a junior in college in 1967. Within two weeks of getting his license he was involved in a head-on collision that totaled his parents’ green Rambler. Fortunately, neither Michael, nor his passenger (his brother Jonathan), nor the other driver was seriously hurt. Even more fortunately, Medved’s driving has improved since that time-with no major accidents (to date) in the last 30 years.

During his period of political consulting, he worked briefly for Congressman Ron Dellums of Berkeley, California-the single most left wing member of the House of Representatives. After six weeks Michael resigned in disgust,and the entire experience helped push him permanently away from the Democratic party.

Michael’s book “Hollywood Vs. America” featured a particularly odd “endorsement” on the cover of its British paperback edition.Citing the comments of English director Michael Winner, the line proclaimed in big letters: “MY WORST READ OF THE DECADE.” Writing in New York magazine,establishment critic David Denby also enthusiastically declared: “This is the stupidest book about popular culture I have ever read through to its conclusion.”

Michael Medved’s arrest record: in 1965, at age 16, he was picked up and spent several hours incarcerated for illegally camping at San Clemente State Park in California. Six years later he was briefly detained in upstate New York for carrying concealed weapons in his car— steak knives (given away as a gas station premium) which he had stored in his glove compartment.

Michael’s father was one of 16 Americans selected by NASA for the original “Scientist Astronaut” program. After nearly a year of training and preparation, he washed out of the mission due to unhealthy gums.

Michael is a passionate believer in Sasquatch.

While hitchhiking home to California during final exams period (January) of his freshman year at Yale, Michael suffered frostbite outside Omaha due to his poor planning— wearing tennis shoes in weather that reached 20 below zero. On that trip, he also managed to make it from Connecticut to California in the astonishing time of 76 hours.

In 1968, Michael entered an eating contest sponsored by Dunkin’ Donuts of New Haven. He consumed more than two dozen large, filled donuts within the allotted one hour time limit and finished second in the State of Connecticut.

In another astounding feat of athletic glory, Medved was the starting second baseman on the Elders of Zion softball team that upset all expert predictions in 1986 by winning the championship trophy in the LA Jewish League.