Stand In The Gap 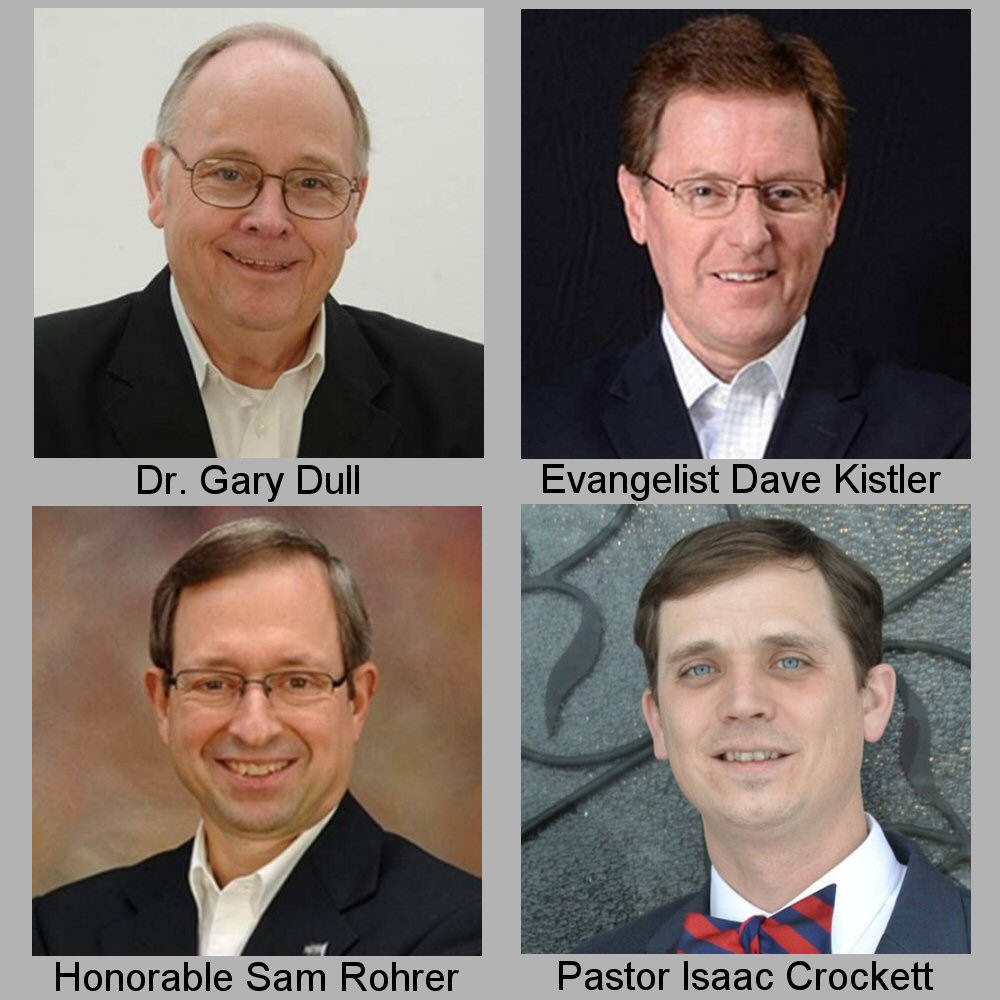 After a week of revival meetings at his church, seven year old Sam Rohrer recognized his need for a Savior. With his dad’s guidance, he put his faith in Christ that night. Motivated by his mother to choose Biblical heroes, Sam was drawn to Joseph and Daniel. Perhaps his admiration for those two men caused him to wonder if he might someday preach or enter the political field. After majoring in Business and graduating from Bob Jones University in 1977, he worked in the business world for fifteen years.

In 1992, God redirected Sam’s steps into state government.For the next eighteen years, he served as a State Representative in Harrisburg.Being an elected official also opened up possibilities for him to share his testimony and to preach in many churches across the state.

Representative Rohrer distinguished himself in the area of economic policies while serving as a Member on the Appropriations Committee and as Chairman of the House Finance Committee. He sought to apply Biblical principles in all areas of legislation including finance as he wrote alternative state budgets and encouraged both parties to lower costs and to avoid tax increases. He also served on the House Education Committee for sixteen years where he fought for parental rights and against Federal entanglement in educational policies. Representative Rohrer authored the Education Improvement Tax Credit scholarship (EITC), which has already aided over 250,000 Pennsylvania students to attend private or Christian schools. The EITC Law has been noted as the model school choice law in the nation. During his tenure, Representative Rohrer was frequently referred to as the ‘Conscience of the House’ because of his consistent stance for moral truth in public policy.

In 2009, Sam followed God’s promptings to campaign as a candidate for governor of Pennsylvania, and in 2011, as a candidate for the United States Senate. Although he gave up his position in the House of Representatives to conduct those campaigns, God used the statewide travels to deepen his relationship with many pastors across the state.

As a minister of God in government, Sam developed empathy for the similar challenges faced by pastors in the pulpit. In June of 2012, Sam was chosen to lead the Pennsylvania Pastors Network. Uniting his experience in public policy and his love for pastors, he encourages pastors to boldly preach Biblical Truth, especially on issues affecting our current society. In July of 2013, the inception of the American Pastors Network has enabled the creation of new state chapters and a nationwide voice for Truth into the public square. Sam now serves as President of both Pennsylvania and American Pastors Networks.

Sam and Ruth Ann have been married for 36 years and are parents of six children and grandparents of eight. They have home schooled their children for 23 years and are active members of their local church.

Listen to an interview with Sam Rohrer about his personal testimony and current vision for the American Pastors Network.

Gary G. Dull was born into a fine Christian family in Western PA in 1952 and therefore always had a strong biblical influence. At the age of 12 in 1964, while attending church camp, Gary received Jesus Christ as his personal Lord and Savior. The very next day after being saved he was asked to preach his first sermon at the camp and has virtually been preaching ever since. During his teen years he was a youth preacher for Youth for Christ and traveled with the YFC gospel team on a weekly basis. In January 1968 Gary surrendered to the call of ministry.

Gary has always been interested in missions. For ten years he served as the President of the Gospel Furthering Fellowship and in 1989 founded and continues to serve as the President of the Way of Truth Ministries which has missionaries in Africa, Asia and North America. In addition, WOTM produces radio programs aired on nearly 75 stations,conducts truck stop ministries, Bible Institutes, medical centers and a military ministry. Gary has been privileged to travel to 25 foreign nations to preach the Gospel.

Over the years Gary has served on the boards of two Bible Colleges, two mission boards and is currently on the executive council of the National Clergy Council and the Faith and Action ministry in Washington, DC.

As Pastor of The Faith Baptist Church of Altoona and the President of the Way of Truth Ministries, Gary produces weekly television programs and daily radio programs.

Gary married his wife Nancy in 1974 and has three boys who are serving the Lord with their families. Currently Gary and Nancy have 11 grandchildren.

Gary’s goal in life is to put forth the effort to reach the world for Christ through preaching the Gospel and making an impact for Christ in society. In achieving that goal Gary has had the honor of being on radio daily since 1975, has preached revival services, evangelistic meetings and mission conferences. Since 1996 Gary has been honored to have a ministry to those in government which has opened doors of opportunity for him to build relationships with elected officials from the local to federal level.

Gary always encourages people to “Stand up for faith and freedom, keep looking up, for the best is yet to come.”

Dave Kistler was born into a pastor’s home and received Christ as Savior at a young age. Called to preach at the age of 16, Dave abandoned his pursuit of a legal career and began preparation for the ministry. Following the completion of his undergraduate degree and two seminary degrees, Dave entered full-time ministry as a youth director in Tampa,Florida. During those early ministry years, Dave responded to the call into evangelistic ministry ultimately relocating to North Carolina where he and his family now reside.

Evangelist Kistler’s ministry consists of local church revivals, city-wide crusades, as well as youth and men’s conferences. In early 2000, Dave formed HOPE Ministries International, a multi-faceted ministry that emphasizes city-wide crusades as a way to impact major metropolitan areas with the gospel. In 2002, HOPE Ministries conducted the first of three crusades on the National Mall in Washington, DC.Additionally, HOPE has twice been invited into the Pentagon for evangelistic crusades.

As a result of his ministries in Washington, DC, Dave began “HOPE To The Hill” in 2012, an ongoing ministry to elected and appointed officials on Capital Hill. At least four times a year, he leads teams of pastors and interested parties to DC for evangelistic and discipleship ministry to legislators. Dave’s travels have taken him multiple times from coast to coast in the United States, as well as to England, France,Belgium, Scotland, Wales, Canada, Mexico, the West Indies, and Africa.

In 2013, Dave was elected President of the North Carolina Pastors Network (NCPN), a team of Biblically committed pastors who desire to bring God’s truth to bear on the moral and cultural issues of our day. Dave is married to Betsy Silos Kistler and is the father of three children, all of whom are professional musicians.

Pastor Isaac Crockett grew up in a pastor’s home and from a young age was involved in church ministry. He has been the senior pastor at Hamburg Bible Church in Hamburg, PA, since 2009 and he assisted in 2 other church plants before coming to Hamburg. Isaac has had the opportunity to travel throughout the United States preaching and teaching in hundreds of churches and Christian Schools, as well as 5 foreign countries.

Isaac has a Master’s degree in Pastoral Studies from Bob Jones Seminary and has done post graduate studies in the field of Family Therapy at Evangelical Seminary and Social Work at Drexel University College of Medicine. Isaac studied Spanish in a total immersion course in Antigua, Guatemala, and has used his Spanish to serve the Lord in Mexico,Guatemala, El Salvador, Argentina, and a Spanish-speaking church plant in Spartanburg, SC.

While ministering as a pastor and church planter, Isaac has also worked on the side at times as a social worker and substitute teacher. He has taught everything from Kindergarten to High School classes in 7 different public schools and 3 school districts. His favorite opportunities were teaching Special Education classes and working for the County teaching students who had behavioral and emotional issues that kept them from their regular schools.

Isaac and his wife Jill met their first week of college in the fall of 2000 and were married after graduating in 2004.Isaac and Jill home school their 3 children. The Crocketts enjoy hiking portions of the Appalachian Trail near their home, fishing, and playing with their 3 dogs Yankee, Doodle, and Dandy. Isaac also is a social media coordinator for his brother’s company Crockett Doodles, and pictures and videos of Isaac’s children and dogs can often be seen on the company’s website and various social media platforms.

Isaac is thankful for the opportunity to have grown up in church ministry and be involved in ministry almost his entire life. He has been blessed by the resources and fellowship of the American Pastors Network and encourages pastors and church leaders to get involved with APN.