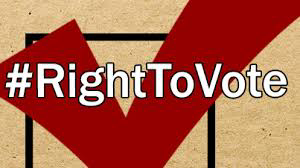 Open Letter to Dan Crenshaw and all Republicans in Congress

The American people elected you to represent us in this government supposedly "of the people, by the people, and for the people".  We thought this meant that you would look out for our interests now and in the future.

We have watched for nearly 50 years while our laws have been ignored at the border and selectively enforced.  We elected representatives we thought would fight for enforcing the laws and taking care of "the people", but normal American citizens always seem to be the last ones considered.  Other laws have openly been broken with NO consequences for those in power.  It seems the laws are only enforced on political enemies of the left.

The most sacred right we have is the right to vote and select those that will represent us in our government.  That right to vote has been eroded over many years through registering anyone that requests it and having absolutely NO verification if that person is eligible to vote.  This erosion of our voting rights culminated in a massive fraud during this last election easily proven or disproven by a simple analysis of the voter registration lists, actual ballots counted, and the machines used to count the votes.  This analysis was requested repeatedly to provide confidence in our election process, but at each point rejected with no valid reasons.  All we wanted was proof that our election system was valid and could be trusted.  Now, the most sacred right of the people has been taken away as our vote is now meaningless since it can be changed by those counting in secret.

You were elected to fight for us and represent us in this process.  Since you backed down and let the election be stolen, we will not be able to back you when the next election comes along (even the fake ones). Since the communists and fascists are already ignoring our constitution and laws in an attempt to destroy this once great country, we will be trying to survive the coming oppression instead of fighting for you to be our representative and get a guaranteed paycheck while our ability to work and provide for our families is being destroyed.

We counted on many representatives in the past to fight for us.  Paul Ryan was once hailed as a champion of true Americans, but turned his back on the constitution.  John McCain was once a patriot and endured severe hardships as a POW but also abandoned his constituents.  I can name many more, but it seems those that get to Washington seem to only care about themselves after getting elected and won't stand up for the working people.

Don't expect us to listen to your pathetic excuses that you don't have the constitutional authority to stand up for us and the truth. Don't expect us to believe you will fight for us in the future or stand up for the constitution.  You say "Don't worry, we will let them get away with it this time, but we'll get them next time".  Maybe the 40-60 million illegals that are added to the voter lists will vote for you if you survive the purge that comes from fascists when they take power.  We have given up hope since only a few actually tried to fight for us and one of the greatest Presidents this country has ever had.