Are You Ready To Give Up Your Rights? 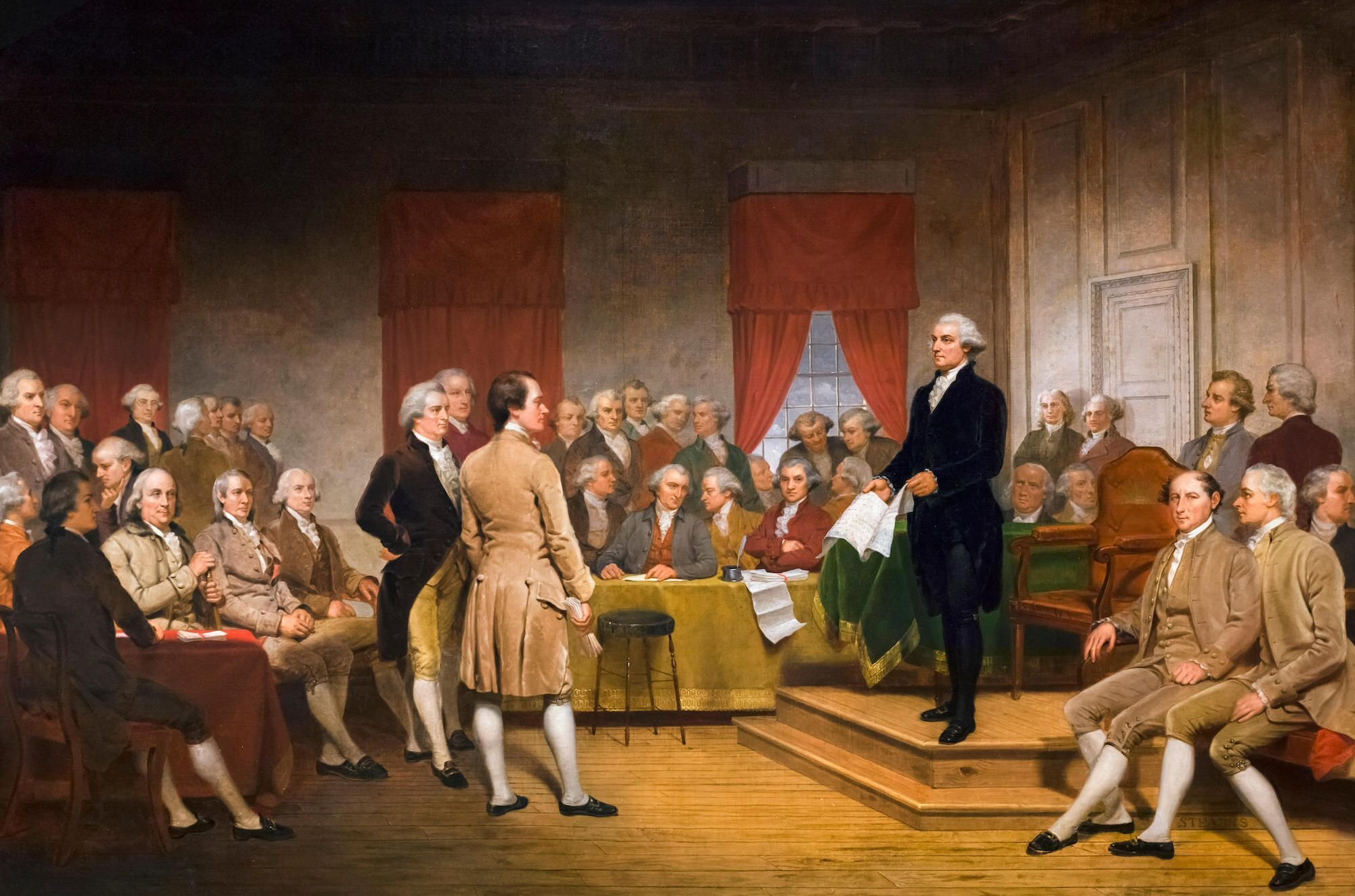 Are You Giving Up Your Rights to Life, Liberty, and the Pursuit of Happiness?

While all over the country, people “stay at home” to “save lives,” I cry for my country. While all over America, businesses are forcibly closed to “flatten the curve” and “stop the spread,” I cry for my country. While I watch acquaintances posting on social media about how they are doing their part, how they are “sitting on their couch” as their grandparents “fought in World War II,” I cry for my country. I am not crying for the lives of the 30,000 people who have died, but for the approximately 328,000,000 whose lives will be forever altered, not because of the Coronavirus, per se, but because of the government’s response to it. Our government’s response to this disease is destroying the very foundation of our country.

America is the only nation founded on the principle that it is your right to live your own life and to seek your own happiness through the freedom that is naturally and rationally proper to mankind. Thomas Jefferson immortalized this concept in his phrase in the Declaration of Independence, “life, liberty and the pursuit of happiness.” Jefferson and the Founding Fathers believed that these rights are “inalienable,” meaning they cannot be taken away but are embedded in the very nature of man. They were not the first to believe this. Aristotle said, “it is evident that the form of government is best in which every man, whoever he is, can act best and live happily.” America’s founders were the first to embody these principles in the existence of a nation and its form of government.

So, let us examine all three of these cardinal principles laid out in the Declaration of Independence. First, life. What is life? Life is “existence,” according to one dictionary definition. But anyone who is truly alive knows that mere existence is a poor definition of life. One can “exist” while one’s biological functions are being supported by machines. One can breathe, blood can circulate, eyes can blink, but this is not all that is required for human life. Would you be content to live your life as a vegetable, with your body performing all of its physical functions, but nothing else? Not me. This is “existence,” according to the dictionary, but it is not human life. I’d just as soon die as “live” as an unthinking, unfeeling, automated vegetable. This idea also stems from as far back as Aristotle, who said, “Happiness is the meaning and the purpose of life, the whole aim, and end of human existence.” But Aristotle did not equate happiness with “amusement,” rather with action dedicated towards “the way of excellence in a complete life.” The achievement of real life, human life, requires reason, thought, expression, and choice, i.e., freedom.

According to the dictionary, freedom is “1. the power or right to act, speak or think as one wants without hindrance or restraint, 2. absence of subjection to foreign domination or despotic government, 3. the state of not being imprisoned or enslaved.” Freedom encompasses a broad range of concepts that are guaranteed to us as Americans through various documents such as our Constitution and Bill of Rights. In the Declaration of Independence, Jefferson wrote specifically about liberty. The definition of liberty is quite specific, “the state of being free within society from oppressive restrictions imposed by authority on one’s way of life, behavior or political views.”

Today, I look around and see American liberty being eroded on a daily basis. We are being told we must close our businesses and that we may not attend church, synagogue, or other religious services. We have been told we may not congregate in groups, be it for political, religious, educational, or social purposes. These are drastic restrictions on our way of life. We are being told not to touch others, not to stand close to them, not to go to the park with our families, not to visit our grandparents. In some states, people are even being warned not to go to the grocery store, and businesses are restricted by which items in their store they are allowed to sell based on what the government deems to be “essential.” Dr. Anthony Fauci, the Director of the National Institute of Allergy and Infectious Diseases, said in a recent interview that no one should ever shake hands again. In New York, there are already fines in place for anyone who stands closer than six feet to another person in public. These are definitely “oppressive restrictions imposed by authority” on our behavior. It’s not yet illegal for someone to have dissenting political views, but when anyone who disagrees with lockdowns and quarantines is called “ridiculous” by mainstream media like MSNBC, I have to wonder how much longer it will be before anyone who doesn’t shut up and comply is called a “virus-denier,” or is fined or otherwise silenced for promoting ideas that mainstream media and politicians think are “dangerous”. Social media is already rampant with people name-calling anyone who doesn’t fall in line and agree with the mainstream media’s view that Coronavirus merits a full shutdown of our entire society. Yet, it’s hard to argue with the fact that, based on the definition of “liberty,” our American liberties are being systematically destroyed without any guarantee of when or how they will be returned.

Our lives are being stripped down of all but the barest essentials. Our liberty is being eroded further and further on a daily basis. The third of Thomas Jefferson’s guarantees for Americans is the right to the “pursuit of happiness.” Note that in this phrase, happiness itself is not guaranteed, only the ability of each person to PURSUE their own personal happiness, as long as they are not, by physical force, infringing on the rights of others to do the same. None of our Founding Fathers, nor our founding documents, offer any guarantees of success in these pursuits. They only offer guarantees of freedom to pursue your passions, your innovativeness, the greatest things that your imagination can conceive and that your brain can enact. The ability to be free led to inventions such as the smoke detector, the zipper, the hearing aid, the airplane, electric traffic lights, sunglasses, and the microwave, just to name a few of the innovations that the freedom of the 20th century allowed ingenious individuals to create. In today’s world, in the “new normal,” as some would like us to call it, we’ve been stripped of our ability to pursue our own happiness. Instead, even so much as whether we can leave our homes or not is dictated by the government. Some people can easily pursue their happiness from the comfort of their homes. But many cannot. For many people, the ability to pursue their happiness depends on their ability to go outside, to associate and collaborate with others, to work in environments that cannot be replicated within their home, and to have their minds and resources unfettered by government mandates.

Our lives, liberties, and our abilities to pursue happiness have been decimated by the government over the past two months, and many state governors are giving no timeline for when these oppressive measures will end. Politicians and members of the mainstream media alike claim that this is what is necessary for “public safety.” Thomas Jefferson said it best when he said, “I prefer dangerous freedom over peaceful slavery.”

I am not advocating reckless behavior. I don’t say that the virus is a hoax or that we should ignore it and pretend that it does not exist. By all means, aid or isolate those who are most vulnerable. Use the resources at the government’s disposal to prop up hospitals and health care systems. Issue warnings and give people information so that they can decide for themselves how best to react under the circumstances. They can choose whether they want to stay at home, decide not to visit family, or not to participate in large gatherings. Businesses will similarly take the available information and make sensible choices about how to conduct themselves under the circumstances. They will and have come up with innovative solutions as to how to operate under the circumstances, just as most people will assess their own risk and adjust their behavior accordingly because they want to remain safe and healthy.

But power-hungry politicians and sensationalist media outlets are using fear-mongering to manipulate the public into believing that giving up their freedom, surrendering the rights that our forefathers fought and died for, is somehow necessary for the good of society. I am appalled at the casual approach I’ve observed from many people regarding the destruction of their freedoms, and, perhaps even worse, the flippant attitude that they are somehow acting to save the world or save lives by willingly giving up, not just their own liberty, but the freedoms guaranteed over two hundred years ago to an entire nation. I say, NO! There is no valid reason for stripping away American liberties, and the constraints being placed upon our ability to create, to invent, to innovate, and to LIVE will cause greater and longer-lasting harm to our society than any virus ever could. This systematic and perpetual erosion of freedom is not and will never be an acceptable or necessary response. I am not the first to employ this quote in recent days, but Benjamin Franklin said, “Those that can give up essential liberty to gain a little temporary safety deserve neither liberty nor safety.”

Some might tell me, “Oh, relax, just give it a couple weeks, and everything will go back to normal.” To that person, I would say, I hope you’re right. I hope that six months from now, this will all feel like a bad dream and that all the government controls now in place will be no more than a distant memory. Unfortunately, I think that’s an idealistic and naive attitude. Already, the overreaches on the part of government have become vastly expansive, far exceeding the bounds and timelines that were set or promised at the outset of this crisis. I am reminded of a quote from John Adams, who said, “A Constitution of Government once changed from Freedom, can never be restored. Liberty, once lost, is lost forever.”

Nothing, no virus, no invasion, no war, no political jargon, no fear-mongering from the mainstream media, should prompt us to give up our liberty, which was so hard-won and fought for by our forefathers. America was founded on the ideal that it is the right of each individual to live their own life, to decide what is best for themselves, to pursue their own happiness and their own goals. America is a country where each person should be able to go as far and high as their own mind, body, and spirit can take them. But this ideal cannot be maintained by default. It must be defended, upheld, and fought for on a daily basis. If today we abandon the basic founding tenets of what it means to be an American, we will not be able to recapture them easily. Another generation, our children, or our children’s children, will be forced to take up the banner and shed their own blood in a fight for the freedom that we lost, not because of some external enemy, but because we lacked the courage to stand up for the principles that make us Americans, our inalienable rights to life, liberty and the pursuit of happiness. Those of you who seem so willing to give up your freedom now, in order to obtain the illusion of temporary security, ask yourself, is this the legacy you wish to leave behind?