Welcome To The American Patriot Union!

Restoring Virtue and Prosperity Through the Power of Patriotism!

TAKING BACK OUR COUNTRY!!

America is under attack by those that will destroy her if they aren't stopped! Whether by ignorance or by intent many different groups with different ideologies are seeking to remake America according to their vision. But our Constitution defines what Americanism is and only those that support and defend that vision are her Patriots. And only her Patriots can do the job of restoring America to the vision of the Founders... a free and just government of, by and for the people. Through this Patriot Union those that love this country can do the job. United We Stand... Divided We Fall!

As you explore this website you will begin to see the vision of the Patriot Union. Nothing like the Patriot Union has ever existed in America before and it is important to understand exactly how the Patriot Union will work to restore citizen government. Once you've looked over the site and have a good idea of the power of what we are building, and how your membership in it, will work to restore America, you will want to join. Membership is free and joining the Union is vitally important because the strength of it is related to how many we are. With your membership we are stronger.

The next step, and this is where the real power comes from, is creating a profile on our Social Network and participating in the discussions, polling and other events that will be presented there. This is where your voice is heard and, from it, the voice and work of the Union is guided.

The Founders' Vision For America

The founders of our country had a vision for America to be a government, of, by, and for the People. They intended for it to remain Free and Just.... the 'Land of the Free and Home of the Brave'! They did not trust government institutions to sustain Liberty and Justice. The government they created in our Constitution defined a limited central government, the Federal Government, to be one that was small in its scope of authority and controlled by The People. To preserve Liberty they created a Republic of Sovereign States, with representative governments where the people in each State could determine by local elections how they would be governed. The greatest power was intended to remain in the hands of the People in their States, not in the hands of an elite political class at the Federal level. That is not the America we live in today.

Today we are at war for our country. We are fighting Marxist Leftists, Globalists and Terrorists inside and outside our borders. They are well funded and very well organized. Their ambition is to tear America apart, sewing division and presenting a false narrative. Our News Media has become a flood of disinformation. Our schools have become indoctrination camps. The Entertainment industry has become an instrument of propaganda. How did we arrive at these crossroads in America's story?

What Has Gone Wrong In America?

For America to remain Free and Just the People must govern. As beautiful as the founder's vision for America was, at the time it was virtually impossible for the people to govern. The limits of communication and education meant that it was difficult for The People to remain informed and engaged in the processes of government. Over time power was taken from the States by the Federal Government until now, in our modern era,the majority of Americans believe that this powerful Federal Government was what the founders intended. But we can see that the Federal Government, and our State governments, have been corrupted by power. Those we elect imagine they are 'leaders' to decide for us how we will be governed instead of followers to represent our will.

Power has corrupted our governments at all levels. What makes this worse is that too many Americans do not understand the founder's vision and are ignorant of the ideals and virtues that are required to sustain Liberty and Justice. Simply put, America is now populated by people, many of whom either do not understand the American vision or, even worse, they have been deluded by arguments of Socialism, an ideology that is antithetical to 'Americanism'. They do not understand that being free also means being responsible for oneself. It is not to say that we Americans are not to care for one another or to refrain from helping and caring for those that cannot care for themselves. But Americanism declares that is not the role of governments because when governments begin to redistribute wealth it means they also must make the moral decisions for ALL the people, and that means power which ultimately leads to tyranny.

Why We Need A Patriot Union

‘America must be United or it’s not America. But Good cannot compromise with Evil! Sheep and Wolves cannot sit down for dinner together.  Good must win over Evil and in so doing Evil must reject its way and change. The Good people in America must lead the way and by demonstrating a better spirit with better solutions persuade any opposing it that it is wrong.’

Right now America is divided into two basic groups... the Left and the Right. Both sides are composed of different groups with different ideals and philosophies. On the Left we have Socialists,Marxists and many who are old school Democrats who are rapidly becoming disenfranchised from their Party leaders. On the Right we have basically two groups, old school Republicans and Constitutional Patriots. And over some years those on the Right have grown more and more weary of their Party leadership as well. The American Patriot Union intends to be non-partisan and driven by two things, one, the US Constitution and the ideology and philosophy it establishes for ALL Americans! And two, the moral ideals of faith and virtue that drove our founders in writing that Constitution. Millions of Americans want to see America restored to the ideals of Liberty and Justice for All. We do not need political Parties... we need to be a United States of America centered on the Constitution and its promises of Freedom!

America cannot be restored except by those that hold the ideals of Liberty and Justice in their hearts. Only American Patriots can guide this nation back to where it must be. The vision of this Patriot Union is to provide the vehicle for Patriots to do just that... to give them a 'Voice and a Hammer'... to provide them with the means to take control of our governments and our institutions and guide America back to what it must be. Virtue and Goodness are the soil for Prosperity and Freedom. So the American Patriot Union organization and the website we're providing is a tool for the collective power of the American Patriot Community to take back America, to end the pollution of Socialism and Communism, and to see virtue and goodness restored in our country!

The full vision of how this Patriot Union can provide Patriots the means to restore America will begin to be clear as you read further. And even more, as you begin to be a part of this Union, using the social networking environment we're providing here, using the resources and information we'll provide, and working together with other Patriots like you to use our collective strength to force change in our governments and institutions, the full understanding of how we will take back our country will inspire and empower you. Thank you for being with us.

*Attention*
Much of this website is still under construction. Many of the features and resources that we intend to provide have to be developed. Until our membership grows we cannot solicit the resources needed to build the Patriot Union organization and the features and functions of the Union that are described in this website. This is why we need YOU to join the American Patriot Union! We can only save America together!! 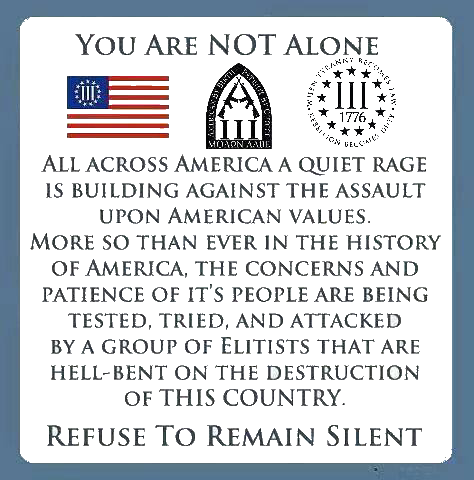